So, you’ve finished your novel and queried a few agents. Now what?

First, pat yourself on the back and give yourself a fist bump! Not a lot of people can say they wrote a novel. Now that you’re done, what’s a writer to do? Sit around and bite your nails? Finally clean your house because you neglected it for so long? Devour every last chocolate chip in the house?

No! That is not what you do! The best way to handle waiting, and waiting, and waiting is to wait some more and while you’re at it, eat the entire box of chocolate chip cookies you have set aside for your kids’ lunches. Strike that. Eat the Pepperidge Farm Mint Milano cookies you’ve got stashed in the back of the cupboard. You know, the bag hidden behind the box of whole grain crackers, conveniently out of sight, but not out of mind.

I’m kidding. Put down that crisp biscuit with the luscious layers of thin dark chocolate and white mint icing (okay, you convinced me, maybe just a tiny lick). Now it’s time to start a new project (if you haven’t already). What happened to that story you started but never completed. You know the one, stuffed in the back of a drawer, or lost in your document file on your laptop. It’s been sitting there awhile. What are you going to do with it?

What if you didn’t finish it because something about it bugged you and you weren’t quite sure what it was. How about digging it out, blowing the dust off and reading it again. Maybe whatever subconsciously bothered your “writerly senses” will stand out and you will get it. “Oh, I see! It’s unrealistic to have Merle’s older brother’s girlfriend discover her uncle’s got a missing sister who was lost at sea as a baby and raised on an uninhabited island by gourmet applesauce eating iguana’s.”

Yes, it may be time to re-work that plot. If not the plot, maybe certain characters stand out and deserve their own story. Or a great line jumps out and leaves you asking, “what if?” Where could that line take me? There must be something redeeming about the manuscript. Don’t leave it abandoned, take from it and make something new. The one thing you can be assured of–if you leave it in the drawer or stashed away on your hard drive–the world will never know anything about it. Whatever “glowing” piece of inspiration that is written on the page will never be found. No one will hear of it…unless you want it that way, then by all means, leave it there.

But, here’s your chance. Take it out, find something you can borrow, use, or steal for your future project. After all, it’s yours. Shame to waste it. 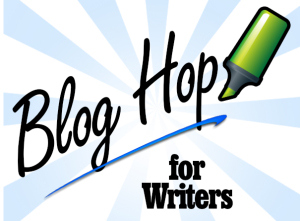 It’s a blog hop! Thank you to Jessica Rowland for tagging me. Jessica and I are in the same writing critique group along with Mary Raper, and Phil Hilliker–all talented writers. You can read Jessica’s answers here. Now, on to the grilling:

1. What are you working on now?

So many things I almost don’t know where to begin. Well, that’s not quite true, I do. I’ve spent the last year and a half working on my 77,000 word YA fantasy novel Sythwood. It has action, romance, intrigue, betrayal and zombie squirrels! Ok, I’m kidding about the zombie squirrels, but that could make for an interesting read if someone would like to write that. Boiled down, my book is about:

It was all that witch’s fault—the Wise Woman, who caught Lisette stealing Althera’s Urn. Yes, villagers warned her about the forest, Sythwood. Silly rumors. She just wanted a loaf of bread, or maybe a cake and that fur lined cloak in Enya’s shop, scarcities thanks to wolf attacks on her family’s flock. But she hadn’t planned on the curse—live as wolf by day, human by night. Now her father hunts Lis thinking she’s killing his sheep, but if she leaves the forest when human, she turns wolf—permanently.

To make matters worse, Sythwood needs a Wardein, or protector, and wants Lis—if she survives. Which means Lis should stop trespassers, like brash Conall, who cuts through Sythwood to obtain a cure for his ill sister from the closest apothecary.  When he’s attacked and left for dead, Lis is conflicted. If she doesn’t save him and guide him through the forest, the soul sucking fae or lust inducing tree minx will snare him for dessert, but aiding Conall brings risk. His cocky smile captivates her heart, but could he ever love a monster?

Yesterday, I turned it over to beta readers and I should hear feedback in a month. The suspense is killing me! While I’m waiting on that, I decided I’m not quite ready to savor the euphoria. Instead, I had the brilliant idea to print and fill a two and half inch binder with my manuscript which I will attack with highlighters of many many colors. I’m so excited, that I must take a picture and show you! Here is my baby: 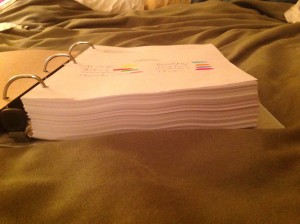 Interesting how seeing my novel in print has increased my desire to fine tune my writing. It’s made the whole experience tangible.

Other projects: I finished a piece of flash called “Perfect” that I’m shopping around while I edit several other short stories. I wrote an article published in the Richmond Times Dispatch. You can read it here. I’m also researching and plotting a middle grade short story set in The Jefferson Hotel, for a forthcoming anthology conceived by the ingenious Richmond Children’s Writers. RCW is a wonderful group of writers in the Richmond, VA area. They are movers and shakers!

I’ve begun a middle grade novel about a boy who finds a mysterious package in his backpack sent by his missing scientist father, and another YA fantasy that I need to finish plotting. Whew! Not to mention this website.

2. How does your work differ from others in this genre?

YA is chock full of dystopian novels, sci-fi, vampire, werewolves and paranormal romance. They’re all great, but I love books that are reminiscent of Grimm fairy tales, mythology and fictionalized ancient history. I incorporated favorite elements from them all; In addition, a strong female protagonist, new and creative aspects to the setting and action scenes that hopefully keep you awake reading into the wee dark hours.

One night in January 2013, I had a hard time sleeping when a story popped in my head and played from beginning to end–like a movie. It was so vivid, I sat up in bed and gasped. I call it my “vision.” I’ve never had an experience like it. I’d been given a gift, all wrapped in pretty paper and topped with a big bow. I couldn’t ignore it, so I got to work. For the next 3 months, I wrote every chance I got until I had my first draft of 55,000 words.

In short, I write what is given to me. It just so happens that what comes to me is fantasy. I suspect all the years of reading about magic and dragons has something to do with it.

4. How does your writing process work?

So far, I seem to be receptive to ideas when I jog or shower. Sometimes just a sentence will pop in my head. I write it down, then further explore what I’ve received by asking myself questions. It leads me to many interesting places. I do need to have quiet and a place to work free from distractions. Late at night or during school hours are perfect writing times. I’ve had to sacrifice a few things so I have time to create, like television and cleaning. Yes, I have a very dirty house. Cluttered, too. It’s embarrassing, so don’t come visit me! But if you do, I’ll clean.

I think my process is a living, growing thing that will continue to evolve. I’m sure the method I use for my next novel will contrast with my first. It’s like raising children–mistakes are made with the first kid, hopefully we learn from those mistakes and try to do better with our second kid. One thing I wonder, will I have a plot handed to me like that again? It seems a unique experience.

I do know that once I have the first draft, I revise and edit and then revise and edit some more. Once I’m done with that, I have friends, family, and my writing critique group read what I’ve written, then I revise and edit again! On to beta readers and then more revising and editing until it’s ready for me to pitch to an agent or self publish or use as wallpaper in my office. A year and a half of writing and revising Sythwood, and I’m just now getting it to beta readers. One day, I hope to be faster. I’ve realized I’m a discovery writer and suspect I’ll need to improve my skills in the outlining department for future books.

Wow! Only four questions? I think I’m done! Time to continue this game, so I’ll tag my friend Phil Hilliker, who not only writes, but is an amazing artist as well. Phil, you’re it!